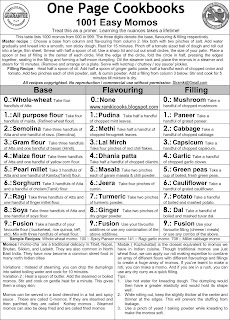 Click the image on the left to view the cookbook.
Momos / momo-cha  are steamed dumplings. These are a  traditional delicacy in Tibet, Nepal, Bhutan, Sikkim, and Ladakh. They are also common in North East India. They have now become a common street food in many north Indian cities
Though most momos are steamed, the cooking technique can be tweaked as below :

Variation 1 : Instead of steaming, you can drop the dumplings into salted boiling water and cook for 10 minutes.
Variation 2 : Heat a spoon of butter. Add the steamed or boiled momos. Stir and cook on gentle heat for a minute. This gives them a crispy skin.
When momos can be served in a bowl drenched in a hot and spicy sauce, they are called C-momos. Steamed and panfried momos are called  Kothey momos . Steamed momos can also be deep fried and taste like a chewy version of our Samosas.
Modak ( Kozhukattai) is the closest equivalent to momos we have in Indian cuisine. Though traditional momos use just wheat flour, we can apply our roti making expertise to combine an array of different flours with different flavourings and fillings to create a huge array of momos. If you’ve learnt to make a roti, you can make a momo. And if you are in a rush, you can use any dry curry as a quick filling.
Tips :
1. Use hot water for kneading dough. The dumpling would then have a greater elasticity and would hold its shape well.
2. While rolling out, keep the middle slightly thicke than the edges. This will prevent the stuffing from leaking out.
3. Use a pinch of yeast / baking powder while kneading. This leavens the dough and makes the momos soft.
Off this goes to Shrutei's Steamed Treats event.
Posted by Ramki at 4:21 AM