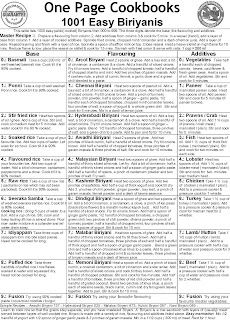 Almost all experts agree that Biryani is a Persian dish, coming to with the Moguls / Arabs. However, many wrongly believe that the name Biriyani is derived from Beiryan ( Persian : to fry) which they claim refers to rice being fried in oil before being cooked.

A Biriyani is in fact a rice sandwich, where layers of meat / veggies served sandwiched between layers of rice. It is interesting to see that many rules for a good sandwich also apply to a biriyani.

1. It should be perfectly cooked, but not soggy.

2. It should have multiple layers

3. It can have vegetable / meat fillings

4. It should be assembled in a colourful, artistic way, with all layers clearly visible - the brilliant white of the rice layer, with splashes of saffron, the brown/ red/ orange meat layer, and the whitish brown layer where these layers mix.

The favouring techniques :
These vary from region to region and actually from cook to cook. A variety of whole spices is fried in oil / ghee. Onions are then fried and other ingredients are added. Popular ingredients are cardamom, cloves, cinnamon, saffron and bayleaf are often added. Kewra / saffron water / rose water is sprinkled on top just before serving.

Side dishes:
Biryani is eaten with a wide variety of additives.In Sri Lanka it is eaten with a pickle, Mint Sambol ( mint chutney), or scrambled eggs. Indian biriyanis are usually served with Raita. South Indian Biriyanis are served with a sour dish of eggplant (brinjal) or Mirch ka salan, In addition , In Tamilnadu a Muslim biriyani meal is complete only with the serving of a dessert ( sweet sticky rice / bread halwa).

The technique of Dum :
‘Dum’ is a technique where the vessel is sealed and cooked from above and below with gentle heating. This gentle cooking allows the flavors of rice and meat to mix and slightly dries out the rice, making each grain separate. Usually the vessel is placed in a ring of charcoal, the lid is sealed with atta and charcoal is placed on the lid. This gentle cooking may last from 30 minutes to over an hour.

Though it is true that traditional Biriyanis from each region follow a similar recipe, with minor variations, there are no hard and fast rules about what goes into a Biriyani, as long as the spirit of the recipe is followed. Remember that the meats and rice need to be perfectly cooked, layered and the rice grains should not stick to each other. As long as you follow this, you can experiment with a variety of bases, flavouring techniques and additives and will end up with lip smacking biriyanis everytime !

Marination :
The process of soaking the meat in a tenderizing paste is common to North Indian biriyanis. Usually yogurt is mixed with ginger- garlic paste, spice powders and the meat is coated with this mixture and rested for 1 – 2 hours . A variety of tenderising agents like raw papaya paste, lemon juice etc may be added. Though meat is usually marinated for 1-2 hours, some regions follow the overnight marination method where the marinated meat is refrigerated overnight. South Indian Biryanis do not use marinated meats.

God said...
This comment has been removed by the author.
7:28 AM

Wow you done a research about Biriyani. Really interesting...and thanks for the recipe..

Thanks for sharing your technique in cooking biryani..I love this dish..

this looks awesome and I saw it just when I sat down with my khitchdi.
It really made me crave the biryani.