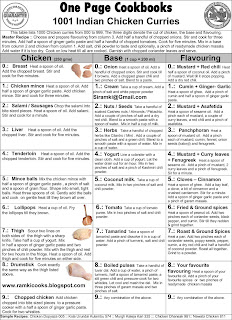 Breast:
The breast of the chicken is almost totally white meat and is usually available as a boneless sheet.

Chicken Mince
This is ground up chicken meat  (Kheema).

Salami / Sausages:
Chicken mince is precooked, mixed with mild spices and is shaped into cylinders. Though not commonly used in Indian cuisine, they can be used for some of the easiest chicken dishes as they require little or no cooking.

Liver
Liver needs to be cooked for a minimum of five minutes on a medium flame to kill harmful bacteria. Soaking it in milk prior to cooking makes it less ‘smelly’

Tenderloin is muscle of the breast, consisting completely of white meat.

Mince balls :
Chicken mince is shaped into small balls and is usually fried or boiled

Lollipops come from the middle of the chicken wing and are usually deep fried.

Leg
The leg of the chicken is made up of the thigh and the drumstick. Both are almost totally dark meat and are cooked the same way. This is the thickest cut of chicken and so needs some marination to make them soft..

Chopped Chicken:
The whole chicken is chopped up into bite sized pieces. This is the cut most used in Indian curries.

For explanation of bases and flavouring techniques, refer 100 chicken recipes.

A note on the dark meat and white meat :
Red meat or Dark meat comes from heavy-use muscles. These are muscles built for endurance and are powered by myoglobin, (the red protein which stores oxygen). The more Myoglobin the muscles have, the redder or darker the meat.

White meat comes from less-used muscles built for quick bursts of energy - these do not contain myoglobin and appear white.

In a chicken the breast muscles are hardly used for flight. So they are white. Flying birds like ducks and geese, have red meat in their breasts. In contrast, the leg of a chicken is completely made of red meat

Fish is mostly white meat, a cow is mostly dark meat and chicken has a mix of both.

Red meat takes longer to cook, but is more flavourful than white meat. 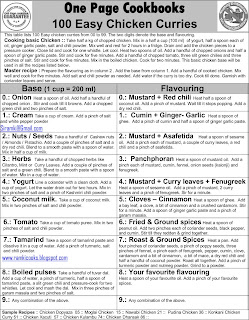 This cookbook lists 100 Chicken curries, greatly simplified, so that a first time cook can easily cook them. The principle is simple – Chicken is pressure cooked first and this cooked chicken is combined with ten different bases and 10 different flavouring techniques to create a hundred different recipes. The ten different bases are listed below

The curry base :
0.: Onion An extra dose of onions is used as a base in the famous Dopyaza ( Double onion curry)

1.: Cream is used as a base to cook up a mild, rich Muglai style curry, the Muglai Chicken

2.: Nuts / Seeds are blended with milk and used as a curry base in the kitchens of Awadh to cook up the Nawabi Chicken.

3.: Herbs - A variety of herbs are used across India as a curry base. Mint chicken , coriander chicken and gongura chicken are regional delicacies.

4.: Yogurt is cooked until dry and is used as a curry base in the Kashmiri cuisine.

5.: Coconut milk is widely used as a curry base in all the coastal cuisines, especially in Konkan, Goa and Kerala.

6.: Tomato is a widely used curry base across the country.

7.: Tamarind is used as a base in the southern states of Andhra, Tamilnadu and Karnataka to cook Chicken Kulambu.

8.: Boiled pulses are cooked along with chicken to cook up the famous Chicken Dhansak, from the Parsi cuisine

10 different flavouring combinations are listed in the cookbook. You’ll note that each flavouring technique calls for a different type of oil. However, you can safely substitute refined vegetable oil in place of other oils.

1.: Cumin + Ginger- Garlic is a flavouring common in Muglai cuisine

3.: Panchphoran fried in mustard oil is from the Bengali cuisine

6.: Fried & Ground spices The mixture of coriander seeds, pepper and cumin is used across India.

7.: Roast & Ground Spices This particular mix of spices is from the Goan cuisine 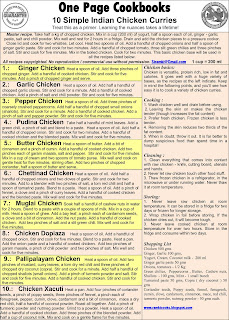 This cookbook lists 10 Chicken curries, greatly simplified, so that a first time cook can easily cook them. The principle is simple – Chicken is pressure cooked first and this cooked chicken is flavoured in a variety of ways to give a range of chicken recipes. You can easily cook up three or four different chicken recipes, on demand, with minimal preparation, in 15 minutes.

1.: Ginger Chicken is just chicken cooked with an extra dose of ginger.

2.: Garlic Chicken is for garlic lovers

3.: Pepper Chicken is spicy being cooked with coarsely crushed peppercorns

5.: Butter Chicken is a Punjabi curry cooked with butter and cream

6.: Chettinad Chicken is an aromatic chicken cooked in a tangy tamarind – onion- tomato base.

7.: Muglai Chicken is a rich & mild chicken cooked in a base of cashew paste and milk

8.: Chicken dopiaza is for onion lovers and packs in an extra heavy dose of onions.

10.: Chicken Xacuti is the elaborate Goan recipe using a heady mix of roast and ground spices along with coconut milk. 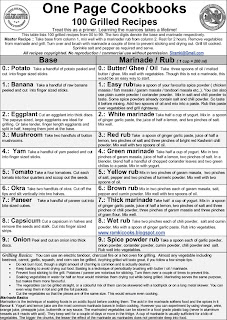 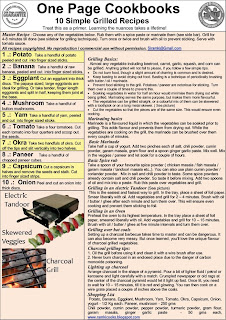 This cookbook lists 10 simple grilled recipes, greatly simplified so that a first time cook can easily cook them. The following recipes are listed 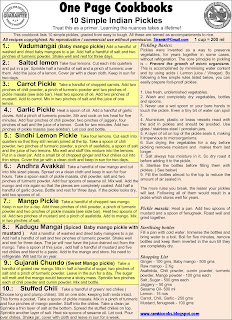 This cookbook lists 10 pickles, greatly simplified, so that a first time cook can easily prepare them. For detailed recipes, refer Pickles, Chutneys and Preserves by Vasantha Moorthy, published by UBSPD. The following pickles are listed in this cookbook: 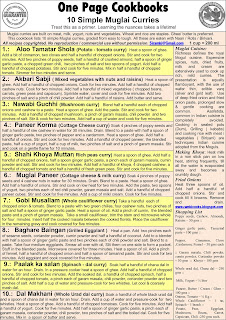 This cookbook lists 10 Mogul curries, greatly simplified, so that a first time cook can easily cook them. For detailed recipes, refer Nita Mehta’s Mughlai Khaana. The following curries are listed in this cookbook:

4.: Paneer Korma (Cottage Cheese simmered in a paste of cashew and poppy seeds)

Off this goes to Srivalli's Curry Mela