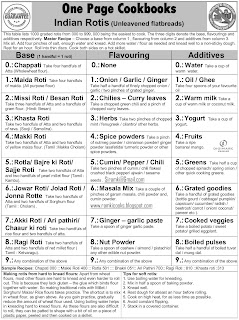 Express cooking in this issue of Ananda Vikatan focuses on different types of chappatis cooked across India. The vikatan article is based on this post.
The word Roti (Hindi: bread) is used here as a general term to cover all unleavened Indian flatbreads. Leavened flatbreads, like the Naan and Kulcha, are covered in a separate post. ( Leavening is a process of letting the dough ferment - In south India, we use this technique for Idli batter. Leavening gives us soft idlis, Naans and breads.)
Rotis can be thick or thin, small or large, round, square or triangular, stuffed or plain. Though they are generally cooked on a skillet, they can also be baked in a tandoor, shallow fried or deep fried. Indian Rotis are eaten with a variety of dals, curries or raitas. It is easy to get lost in the huge variety of rotis eaten across the country. But remember that at their core, all rotis are just cooked dough sheets. The additives, the flours used and the cooking techniques combine to create hundreds of different types of rotis.

Rotis across India
Each state has its own flatbread, mostly made from the locally available grain. Let's start from the south and hop across India from flatbread to flatbread.
Parotas and a unique flatbread – the Pathiri are popular in Kerala. The moplah muslims of the Malabar coast make their super soft Pathris from rice flour. As rice flour is not kneadable, it is partially cooked into starch by mixing it with boiling water. It then becomes more pliable. The dough cannot be easily rolled and is either patted to shape on a skillet or rolled on thin parchment paper and then peeled and transferred to the skillet.This technique is used across India for kneading and rolling flours which are not easily kneadable.

Though wheat is not a staple, Tamilnadu loves the multilayered and flaky parota made from all purpose flour ( maida). This is served only in the evenings and is almost never used for breakfast. The cooked parota is then crushed between palms , separating the layers and making it flaky and crumbly. On roadside eateries you can frequently catch a glimpse of the dough being stretched wafer thin , a large as a newspapaer, by deft flicks of the wrist. The stretched out dough is then gathered to a long cylinder and is coiled on itself. This is then rolled out to a thick disc and shallow fried on a skillet. In southern districts, parotas are deep fried. They are also chopped up, mixed with onions, eggs and served as Kothu Parota. Another common flatbread is the Pori. Whole wheat dough is rolled out into thin discs and deep fried into Pooris which are popular breakfast dishes.

In the less fertile, drought prone regions of Andhra, rice was a luxury and Jonna roti made from sorghum ( cholam)  flour was a staple a few decades back. Karnataka loves the the Sajje roti made from pearl millet flour. It also has Obattu, a stufed paratha like dish made from all purpose flour coloured with turmeric powder and stuffed with sweet, boiled chana dal ( kadalai paruppu.

As foods do not respect man made boundaries, you’ll see a large overlap of recipes at the state borders. This is why obittu is also found in Maharashtra, but is called the puran poli. You’ll also bump into the Jowar Bhakri and Ragi Bhakri here (Bhakris are chapati like flatbreads made from sorghum flour & Ragi flour in central India). Maharashtra gives us the delicious Thalipith, a flatbread made from a mixture of wheat, rice, gram and millet flours. It is interesting to see that rotis become pancakes if too much water is added. To illustrate, check this version of of a Thalipith which is a pancake.

In the Madhya Pradesh we see the Palak Puri, where a whole wheat flour dough kneaded with spinach, ginger, chilies and yogurt is shaped into thin rounds and deep fried.

In Bihar, we see rice flour being used in rotis to make the Chaaur Ke Roti. Sattu ( roasted gram flour) is a popular stuffing in rotis here.

In Orissa and West Bengal, flat breads made from all purpose flour ( maida) are not cooked on a skillet, but are deep fried in oil and are known as Luchis.

In Uttar Pradesh we see the Nawabi version of rotis and parathas perfected by decades of experiments in the dastarkhanas ( royal kitchens). It is here we see the Warq-e-Sada ( ‘plain sheet’) ,a richer version of rumali roti and the warqui paratha which incorporates eggs and ghee into the dough.

The fertile Punjab has its array of delicious parathas. Makki roti, the flatbread made from maize flour is another Punjabi favourite.

In Haryana we have the Besan Roti made from gram flour and wheat flour mixture. It differs from the missi roti in the amount of gram flour used.

In Rajasthan we bump into the missi roti, made from a spiced up mixture of gram flour and wheat flour. It is Rajasthan which is the home of the unique bati - a flattened golf ball sized bread, which is roasted over hot coals and is eaten dipped in ghee.

The Gujarati rotla is made from millet flour and is served with ghee and jaggery. Theplas( wholewheat dough kneaded with yogurt, turmeric, chili and coriander powder) and the travel friendly Khakras (rotis cooked to be as crisp as papads) are other famous Gujarati flatbreads.

In the hilly Uttaranchal and Himachal Pradesh, we get a roti made from Mandwa flour. (Mandwa is the grain obtained from a hardy plant native to these hills). It is only here you’ll see the Gauhat Ka Paratha. Gauhat, a lentil unique to this region is boiled, mixed with onions, coriander and green chilies and is used as a stuffing in the Mandwa flour dough.

Moving north, we see the rich Kashmiri roti made from a dough kneaded with milk, and spices like asafetida, anise seeds, cumin seeds, pepper powder and ajwain. North eastern India prefers rice over roti and so you’ll not see many indigenous rotis here.

Rotis moved out of India with the immigrants and have transformed to become the Loti prata of Singapore, Roti canai of Malaysia, Bussup shut of Trinidad, the Double of the Caribbean, the Palata or htat ta-ya ( Hundred layers) of Burma, the farata and Dholl purri of Mauritius.

The cooking technique changes the recipe:
Knead the dough, roll it into thin discs, cook it on a hot skillet and you have the basic roti. Shallow fry it and you have parathas. Deep fry to make luchis / pooris. Cook the rolled dough initially on a skillet and then cook it over an open fire, puffing it up and you get phulkas. Cook it on a skillet over a low fire till they are crisp and you have Khakras.
Flours used :
Wheat flour is the most common flour used in most Indian flatbreads. Numerous versions of local flatbreads use grains like maize, millets, rice, gram flour in place of or in addition to wheat flour. Add gram flour to wheat flour and you have the missi roti & Besan rotis. Use maize flour and you have Punjab’s Makki Roti. Using rice flour gives us the Ari Pathiris of the Malabar coast, Karnataka’s Akki Roti and Bihar’s Chaaur ka roti. Using sorghum flour gives the Bhakri / Jalad roti / Jowar roti / Jonna roti. Use pearl millet flour and you have the Gujarati rotlas, Bajre ki roti or Sajje roti. Using finger millet flour gives us the Ragi rotis.
Most flatbreads cooked in India are made from a single flour. However, any combination of flours can be used to cook up never before cooked rotis. To see how delicious a mixture of flours can be, check out the missi roti and the Thalipith, which are among the very few rotis which use a mixture of flours.

Special techniques :
Special cooking techniques and vessels are used to cook up several unique rotis. When all purpose dough is stretched wafer thin and cooked almost instantly on a hot inverted wok, we have the Rumali roti. Cook it instead on a large flat skillet, drizzling it with oil and you have the Tamil Veechu Parota. Spread the dough into a large thin sheet, roll it up into a swiss roll, roll out and shallow fry in oil to make the flaky, crumbly parota , so popular in Tamilnadu and Kerala. Shape the wholewheat dough into tomato sized balls, roast them over hot coals ( or bake them) and you get the Rajastani Bati.

Tandoori rotis :.
All flatbreads have their equivalent Tandoori version, where they are not cooked on a skillet, but are baked in a tandoor. These rotis are thicker than their skillet-cooked versions.

Stuffed rotis :
Anything that can be shaped into a tight ball can be used to stuff a roti. Anything wet and soggy will not make a good stuffing. Paneer/ boiled potato / boiled dal/ boiled green peas make easy stuffings, but grated radish / cauliflower take quite a bit of practice. Kneaded Wheat dough is pliable and is easy to stuff. It takes a good deal of skill to make stuffed rotis from other flours. Stuffed rotis are not covered here.

Sweet Rotis :
All Rotis have their sweet version, though most are not commonly cooked. The Sindhi meetha lo lo is one such sweet roti. Take handful of sugar / jaggery, mix in a cup of water and bring to a boil. Simmer for 2 minutes and let cool. Filter if needed. Use this liquid instead of water to knead the dough and your sweet roti is ready.
Interesting recipes

Email ThisBlogThis!Share to TwitterShare to FacebookShare to Pinterest
Labels: rotis

Hi,
Ashish from BlogsJam here.
Wanted to email you, but could not locate your email address on the
blog. we have 2 cool widgets ( a slideshow widget and a content widget
) which can help enhance site interaction and reader's experience. pl
contact me at balduaashish3@gmail.com so that i can send you the slideshow
widget for your blog.

PS: If you have multiple blogs, the widget can help you in a traffic
exchange as well.

A lot of info in one page wonderful. thanks for sharing.

I am reading your blogs, and ANANDA VIKADAN articles.
First I want to appreciate your talent to simplify things.

I am a strong believer of "There is a easy way to learn things simply"
In other words if you know something in-and-out you can able to teach
others in a simple way.

One request - Please give one page cookbook for biryani

nice! i did not know u mentioned my blog! thank u very much! urs is a very innovative way of keeping recipes in mind and its very easy for bachelors 2 follow! keep it up!