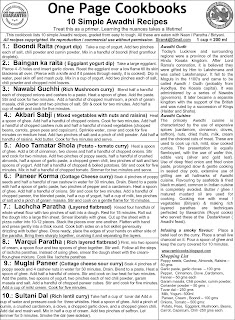 TThis cookbook lists 10 Awadhi curries, greatly simplified, so that a first time cook can easily cook them. The following recipes are listed in this cookbook:

Today's Lucknow and surrounding regions were a province of the ancient Hindu Kosala kingdom. After Lord Rama's coronation, it is believed they were gifted by Him to Lakshmana and was called Lakshmanpur. It fell to the Moguls in the 1100's and came to be called Awadh / Oudh (probably from Ayodhya, the Kosala capital). It was administered by a series of Nawabs (governors). It later became a separate kingdom with the support of the British and was ruled by a succession of Kings (Haider and Shahs).

The princely Awadhi cuisine is characterized by the use of expensive spices (cardamom, cinnamon, cloves, saffron), nuts, dried fruits, milk, cream and the choicest cuts of meat. These are used to cook up rich, mild, slow cooked curries. The presentation is equally flamboyant, with the use of wafer thin, edible varq (silver and gold leaf).

Infusing a smoky flavour:  Place a betel leaf on the curry. Place a small live charcoal on it. Pour a spoon of ghee and keep the curry covered for 10 minutes.

And that is for Siri's RCI- Awadh,  an event started by Lakshmi.